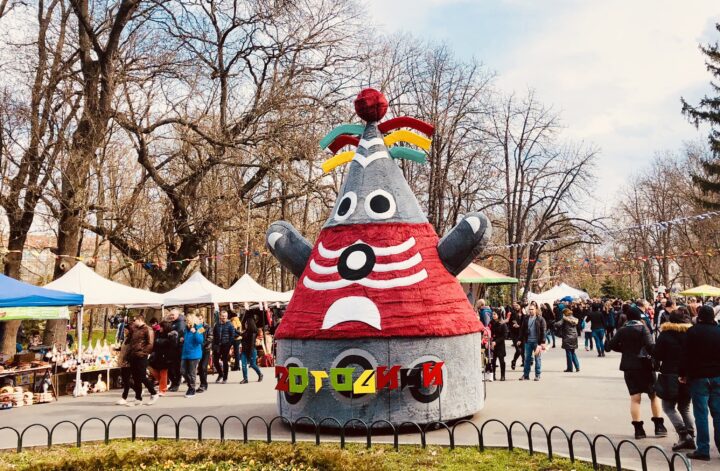 Visiting a Kukeri festival was a must-do on my bucket list for years and I was very disappointed to miss out Surva festival in Pernik this year. However, everything happens at the right moment and one day I saw an advertisement for a day trip from Varna to Kukerlandia festival in Jambol. I signed up immediately and took the road to chase the evil in Kukerlandia.

In the first place, Kukerlandia is a Kukeri festival held in Jambol, Bulgaria every year. Kukeri is a pagan tradition coming from the Thracians and celebrates the end of the winter and the beginning of the fertile season. Moreover, Kukeri are costumed men and women who perform traditional rituals to scare away evil spirits. Their costumes are made of fur and feathers and cover a big part of their bodies. Likewise, an important part of the costume is the mask. The masks are very big, even huge, and represent animals. By the same token, the symbol of this year’s Kukerlandia was a giant 6-meters high mask.

In addition, large bells attached to the belt make an integral part of Kukeri costumes. They create a specific sound intended to chase away the evil.

On our way to Kukergrad, we passed by the Salt Museum in Pomorie

The first site we visited on our way to Kukerlandia was the Salt Museum in Pomorie. Pomorie is a small town on the South Black Sea famous for its salt evaporation ponds. The Salt Museum possesses 20 acres of salt evaporation ponds where salt is extracted using ancient technology. Also, the museum shows salt extraction equipment as well as the evolution of salt production till nowadays. In a word, I really enjoyed the place and brought a jar of salt as a souvenir from my visit!

Finally, we arrived in Kukerlandia (Jambol), Bulgaria. Kukerlandia is a Kukeri carnival held every year in Jambol. It’s famous for the highest masks shown there – the symbol of this year’s carnival was a 6-meters high mask.  Likewise, another great attraction were the 3-meters high masks exposed during the festival. Not to mention that around 100 groups of Kukeri from different cities and villages participated in the Kukeri competition. In addition, there were international Kukeri troupes from Korea and China.

Besides, the festival was held in the central park of Jambol and it was not as crowded as you would expect. Also, the repetitions have taken place in the park and I could make great pictures of the costumes and masks.

The last touristic attraction we visited was Aquae Calidae in Burgas. The initial Thermae was founded by the Thracians and protected by the three nymphs – healers protectors of the hot mineral waters. Romans conserved the Thermae because of their healing waters. Unfortunately, their enemies destroyed them in the 13th century. Thus, the Thermae have become ruins. Later, they were restored by Suleiman the Magnificent who has found a cure to his diseases in the healing waters of Aquae Calidae. Nowadays the Thermae is a tourist spot with a 3D show tracing the history of the site.

Would you like to chase the evil in Kukerlandia festival one day? Keep calm and be a Kuker!