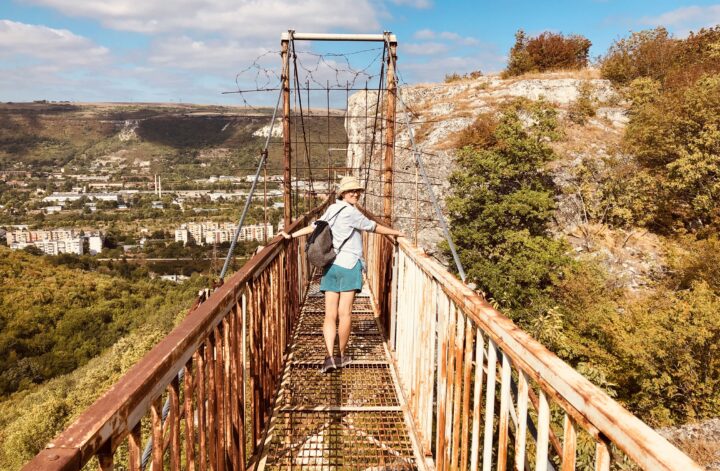 I’ve never heard of the Fortress of Ovech, neither the Shashkanite Rock Monastery near Provadia in Bulgaria, or the Great Bulgarian wall as I call it until I started seeing great pictures on social media. That’s the reason why I decided to visit these places and was overwhelmed by The Fortress of Ovech and Shashkanite Rock Monastery near Provadia. Likewise, I confirm that these sights look as mind-blowing as in all the photos I’ve seen so far!

The Medieval Fortress of Ovech near Provadia in Bulgaria – what to expect?

The Fortress of Ovech is a medieval fortress located on the Plateau above Provadia city. The fortress was built by the Byzantines and was inhabited from the 4th till the 7th century. However, It stopped functioning for almost a century afterwards and re-started again in the 11th century till the 17th century. Therefore, there are witnesses of Thracian presence in the area before the foundation of the Fortress itself.

In fact, the Fortress of Ovech reached its prosperity during the Second Bulgarian Kingdom.

Meaning of the name “Ovech”

Due to a multicultural presence in the region, the Fortress of Ovech was called by the Byzantines “Provat” or “Provaton” back at the days, “Ovech” by the Bulgarians and “Tash Hisar” (meaning stone fortress) by the Turks.

Nowadays the Fortress of Ovech regained its popularity thanks to the great pictures feeding social media.

How to get to the Fortress of Ovech near Provadia?

If you visit Varna, do not miss out to pass by Provadia – located in 50 km western of Varna. It also can be reached by train from Sofia or Varna and there are hourly buses from and to Varna. However, the easiest way remains the car as the Fortress of Ovech is a little bit outside the city of Provadia. The entire Fortress is very well preserved and the scenery opening in front of you is overwhelming!

Shashkanite Rock Monastery – what to expect?

After three unsuccessful attempts to visit Rock Monastery and Sanctuary Shashkanite near Provadia, I finally made it with the great help of a professional local guide.

Before writing a few words about this amazing hidden place, I have to say that one visit was not enough for me and I hope to go back to Shashkanite once the spring comes back again as the sceneries from the rock cells are worth photo shooting when rejuvenating!

Rock Monastery and Sanctuary Shashkanite are located at the Northern end of the Fortress of Ovech and are connected to Provadia plateau by a ropeway (as you can see on the pictures).

Shashkan means “crazy” and that how local people were calling the monks living in the Rock cells back at the days. Thus, the area is still called Shashkanite nowadays.

In 2008, the municipality of Provadia built up a ropeway to the Rock cells. However, access to the cells is subsequently restricted as Egyptian vultures’ nests were found inside.

An interesting fact about the biggest rock cell in Shashkanite Monastery is that around the midday you can see a human face profile projected on the floor by the penetrating sun through the rock window.

Also, I heard that at the end of the plateau there is a rock sanctuary with a sarcophagus carved into the rock. I will keep this curious attraction for my next visit!

Do you like exploring the region where you live? Do you find a new place every time?