10 things to do to enjoy Prague at the fullest 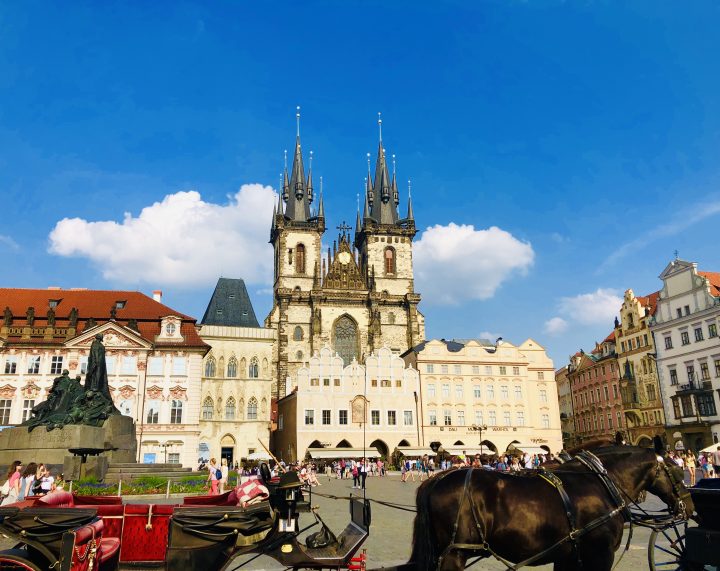 Prague was not on my list, but I was invited to a wedding in Opava (Eastern Czech Republic). Thus, I booked few days in Prague. I decided not to document myself in advance on what to do and where to go in Prague and to discover the city at my pace. The only museum I really wanted to visit was the Museum of Communism. Here is my selection of 10 things to do to enjoy Prague at the fullest.

The Museum of the Communism is one of the best museums I’ve ever been to. It’s very well designed inside with the colours and the symbols of the Communist period. To really visit it and to discover and read all about this regime, you need at least two hours. The exhibition traces all aspects of life during the communist regime in Czechoslovakia – the ideology itself, the political propaganda, the replacement of the private property with public ownership, the Stalinist culture, the working camps, the Spartakiadas, the stories of those who escaped the doctrine. A very impressive place where you can see a typical grocery shop back at the days as well as a classroom serving the ideology. I highly recommend to visit the Museum of the Communism and to pay respect to history.

My hotel was just nearby The Dancing House and I decided to walk down the street in the evening after my long sightseeing day in Prague. From my perspective, the building is just an architectural chef-d’oeuvre and deserves the efforts of being shot at the best hour of the day – the sunset. It’s really challenging as cars are driving by all the time and electrical cables are everywhere, but I believe, I made it!!!

Hear the legend of The Thief’s Arm at Kostel Sv. Jakuba Vetsiho

Well, that was a bonus for me. I joined a Royal Walking Free Tour in Prague last minute and was surprised to discover the gorgeous baroque Church of St. James the Greater (or Kostel Sv. Jakuba Vetsiho) in the heart of the Old Town. Unfortunately, it was not open to the public that day and I could not admire it on my own from the inside.

An arm hangs from the ceiling as a warning to thieves. When you enter, immediately take a look at your right. Up by the ceiling, youâ€™ll see an arm dangling by a hook.

Read at least one of Kafka’s masterpices

Kafka is not on my list neither, but having been in Prague and after seeing all the mind-blowing statues related to his work, I am seriously thinking about it.

The picture above is named after the Kafkaesque novel ”The Metamorphosis”

It’s time to get some Czech beer

Don’t go home without tasting real Czech beer with a good local heavy meat dish. I was surprised to hear that Czech people know exactly how much a pinÑ‚ Ð¾f beer should cost, how it should look and taste. That’s what I am calling ”The art of drinking beer”.

After the beer, comes the food

”VepÅ™ovÃ© koleno” (pork knuckle with dark beer) or just pork a la Czech, in general, is a must-try. I eat meet and I try to taste the local cuisine every time I travel, so I enjoyed a VepÅ™ovÃ© koleno in Czech republic.

The Prague Castle is visible from everywhere. It’s far away from the city centre, you have to take a tram to go up to the hill, queues are massive waiting for a ticket to enter the building and I am not sure not everybody is willing to embark on such an adventure, but it’s one of the symbols of the city and it’s a must-see. The good news is that on the way back to the city you go down and the path is enjoyable as no one is to be seen there. Also, that’s the way straight to Charles Bridge.

On my way to Charles Bridge, I stopped by the river and feed these grey buddies. Quite cute, ah?

Don’t forget to take some food when heading to Prague sightseeing!

Friedl Dicker-Brandeis, a professional painter motivated children in the concentration camp of Terezin to draw their memories, dreams and aspirations for the future. Most of the children, as well as Friedl Dicker-Brandeis, died in Auschwitz. The only proof of their lives “survived” because Dicker-Brandeis hid them in Theresienstadt before being deported to Auschwitz. After the war, about 4,500 pictures were discovered intact. A precious legacy of a dark period in history.

I brought Oplatky KolonÃ¡da – Original round KolonÃ¡da spa wafers as I am a gourmet explorer. How about you? What did you buy as a souvenir from your last trip?

What else would you add to my 10 things to do to enjoy Prague at the fullest list?