Rose Festival and Valley of the Thracian Kings itinerary 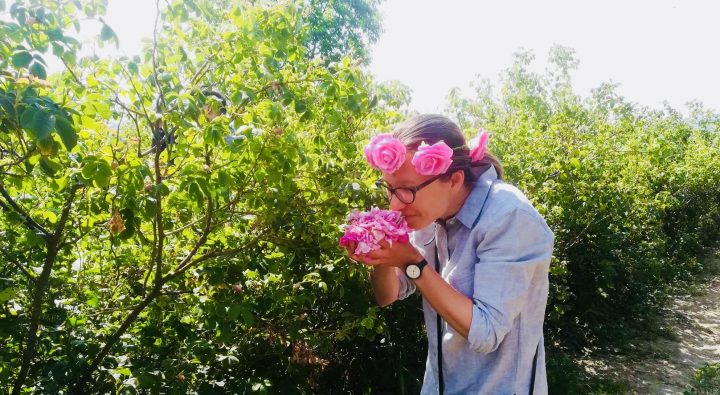 One of the things I wanted to tick in my Bucket list was to visit the Rose Valley in Kazanlak, Bulgaria. And finally, this year the time has come to take the road. I was targeting the Rose Festival, but the more I was digging what to do and where to go in the region, the more places I was adding to my list…At the end, and to my surprise, I saw much more than I expected and realized that it’s a very ambitious task to explore the region in only one weekend! Make yourself comfortable and continue reading my Rose Festival and Valley of the Thracian Kings itinerary!

The heart of Thracia – Stara Zagora

”The heart of Thracia” or ”The city of the Tilias”, Stara Zagora is proud to have both surnames and for a reason.

If you visit Staza Zagora at the end of May – beginning of June you will immerse all your senses in the Tilias’ aroma which are blossoming in this period of the year.

Stara Zagora is built up on top of the ruins of the ancient Augusta Trayana – an important trade and administrative centre back at the days. If you visit the Regional Museum of History (you absolutely should) you will walk on a completely restored and kept intact ancient street with all the original pavement and columns.

Furthermore, the Regional Museum of History keeps a rich collection of artefacts of the existence of Augusta Trayana and a preserved and complete collection of gold jewellery and crafts. Don’t just pass by, enter inside and visit the Regional Museum of History of Stara Zagora! When you walk in the open-air space of the Museum you will see the Amphitheatre of Augusta Trayana – the visit card of the city.

Museum of Religions in Stara Zagora

Even though the Regional Museum of History is a must-see, my favourite place in Stara Zagora remains the Museum of Religions where you can see ruins of 3 different temples: Thracian pagan temple, 10th-century Medieval Orthodox church, and a Mosque founded during the Ottoman invasion. It’s a miracle that the building is still existing after the wars during the Ottoman empire and the fact that the city of Stara Zagora has been burnt to ashes many times and survived as a Fenix. This museum is a mind-blowing trip in time. All the walls are so beautifully painted in different colours reflecting Islamic art and quotes from the Coran. Just brilliant!

After a refreshing homemade lemonade in one of the local terraces, we headed to Starozagorski Mineralni Bani – the Spa region of Bulgaria. Starozagorski Mineralni bani is a small village famous for its mineral waters and spa hotels. It’s a hidden gem where you can literally disconnect from the rest of the world and charge your batteries. The hotel where we stayed wasn’t anything special, but their homemade breakfast was mouth-melting. Never say no to breakfast in a guest house in Bulgaria, you will definitely regret it! We did not have time to go for a Spa but definitely immersed ourselves in the local serenity and endless greenery.

If you plan to visit Bulgaria and especially Kazanlak for the Rose festival, make sure you book your trip, hotel and do all the necessary arrangements in advance because this is not only one of the most visited events in Bulgaria, but in the whole world! All the hotels are booked at least 6 months in advance, this is the reason why we had to stay in Starozagorski Mineralni Bani (20 km by car from Kazanlak).

Our first stop in Kazanlak was the Ethnographic complex Kulata. The Museum itself is a typical 19th-century Bulgarian house showing the architecture, the interior and the traditions of Bulgarian people back at the days. The best thing about this place is that you can see how rose oil is extracted from the flowers as they have all the traditional machinery and instruments exposed to the public. The Rose extraction process is shown during the festivities around the Rose Festival and in the Rose Museum. However, in case you decide not to participate in these activities, you can see the whole process in the Ethnographic complex Kulata. The second highlight of our visit to Kazanlak was a Rose-liquor tasting with a Rose-jam. I bought a bottle of the liquor as a souvenir not only because I wanted to bring the beverage in Holland and serve it on a special occasion, but also because all the main attractions of the city are engraved on the bottle itself and you can keep the bottle as a souvenir.

Valley of the Thracian kings

Kazanlak region is also called ”Valley of the Thracian kings’‘ because of the concentration of Thracian tombs founded there. The most famous one is the Thracian Tomb of Kazanlak. Thus, the Tomb itself is not open to the public, but a copy of it is made to welcome visitors.

Tomb of Sevt III in the Valley of the Thracian Kings

Another famous tomb is the Tomb of Sevt III, and it’s located outside of the city. To sum up, there are at least 10 Thracian tombs concentrated in Kazanlak region

After the Thracian tombs, we made a detour and visited the town of Shipka and its Memorial church ”Nativity of Christ”. It’s a big orthodox church with beautiful Golden cupolas that you can see while from far away while driving.

Next stop on our Rose Festival and Valley of the Thracian Kings itinerary was Shipka monument. The monument is the symbol of the Liberation of Bulgaria from the Ottomans. Moreover, this is an emblematic place in Bulgarian history and for Bulgarian people. Needless to say that it’s majestic and the panorama that opens in front of you from the hill is breathtaking.

Another key point during our trip was the Rose Festival. The festivities take place in different locations. One of the main rituals you can participate in during the festival is the Rose-picking ritual. You can go for Rose-picking in one of the villages of your choice. For more information, please check on the website of the Municipality of Kazanlak.

Nevertheless, we took part in the Rose-picking ritual in the village of Kran, located at the exit of Kazanlak. There were traditional dances and songs, rose oil extraction ritual, rose-picking ritual, a lot of people were dressed in traditional Bulgarian Nosiya (traditional Bulgarian clothes) and immersed themselves in the celebration. We picked roses, made a lot of pictures, I was interviewed by a Chinese guy about the Festival and the atmosphere out there. Just a little bit further we found a lavender field where we stopped for another photo shooting session.

During the Rose festival, a special ceremony of choosing Princess Rose is organized in the city centre of Kazanlak. We had tickets for the event, but it was so crowded that we decided to skip it and took the road back to Varna.

Before finishing this article I would like to give you some tips on how to organize your trip to Kazanlak and what to expect there. I would advise visiting the Rose Valley at the end of May, not beginning of June as almost all the roses are already picked up at the beginning of June and you could be disappointed.

Second, as a tourist and first-time visitor, you would prefer buying all the tickets and reserve a spot for the Rose festival official ceremony in advance, but this is not really worth it. I bought the most expensive package including visits for free to all the Tombs and Museums, but it’s near impossible to do them all. Also, we couldn’t participate in the final ceremony of choosing Princess rose even though we had reserved seats because of the crowd in the city centre.

Considering to go to the Rose Valley next year? Start planning your trip now and read carefully my Rose Festival and Valley of the Thracian Kings itinerary before packing!

A culinary adventure in Bulgaria: what absolutely not miss out to tryIn search of Thracian sanctuaries and stone mushroomsRose Festival and Valley of the Thracian Kings itinerarySouvenirs to bring from your first trip to BulgariaVisit Bulgaria