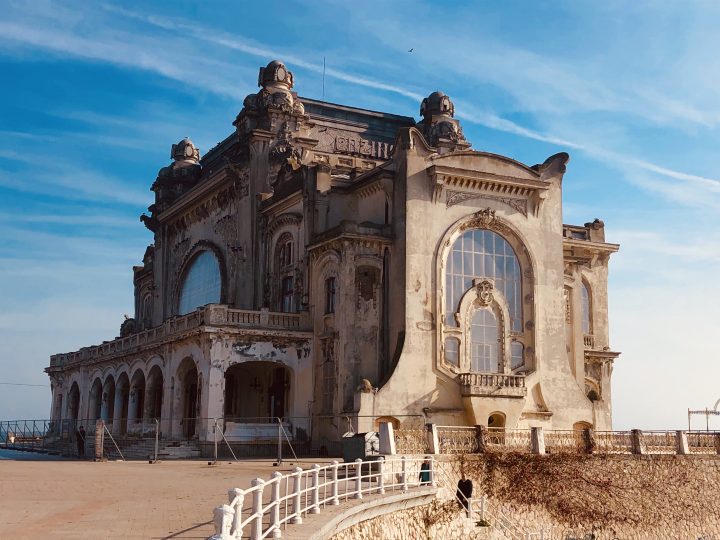 Constanta city walk was on my Bucket list for a while and last November I finally decided to pound the pavement and visit Old Casino, Mosque Carol I and Mamaia hidden park.

Constanta is located in 150km north from Varna and is the most famous Romanian city on the North Black Sea Coast. Most of all, the symbol of Constanta is the Old Casino situated on the seafront along the seaside walk. The building is designated as a historical monument by the Romanian government. Back at the days, it was well-known as “The Romanian Monte Carlo”. To be honest, I wanted to visit ConstanÈ›a only to see this emblematic casino, and I have to admit “It’s worth it!”. Needless to say, I made a myriad of pictures of the monument and this is the souvenir I brought back home.Â

As the weather was warm and shiny, I hanged out on the seaside walk and enjoyed the sunny day.

My next stop was the Mosque Carol I

Next on the list comes the Mosque Carol I. The Mosque is located in between the Old Casino and the main city centre street. It’s not a big mosque, but it has something hidden at the top. If you climb to the top, you will be overwhelmed by a 360° panoramic view over the entire city including the Casino, the Marina, the Statue of Ovid and the Museum of National History and Archeology. Also, you’ll have the unique chance to take some photos from a bird’s-eye view. Don’t miss it out!!!

After the Mosque Carol I, I continued my discovery to the main city square and had a coffee break in one of the numberless open-air cafes.

Museum of National History and Archeology

Another attraction of the city is The Museum of National History and Archeology located on the main square. So, if you have the time, you can visit it. Although,I love museums, this time I decided to skip it.

The Statue of Publius Ovidius Naso

Last, but not the least of my Constanta tour is The Statue of the Roman poet Ovid. It is located in front of the Museum of National History and Archeology. The great poet was sent to the remote Black Sea province by the emperor Augustus where he spent the rest of his life. The city honoured him by building a statue of him. It’s quite challenging to make a decent picture of the statue especially on a sunny day and I tried hard!!!

The final stop of the trip was the City Park Mall in Mamaia district. Mamaia is considered as a resort, so we had a ride alongside. Once arrived at the City Park Mall, I realized that there was a huge park behind the shopping centre. I went for lunch and got a delicious mamaliga (traditional Romanian dish) first and enjoyed some fresh air in the park afterwards.

Constanta is a lovely city for a Sunday city walk and I highly recommend you to visit it if you are in the region.

Have you been to Romania?