The ancient city of Pliska, the Rider of Madara and Bolata Cove round trip 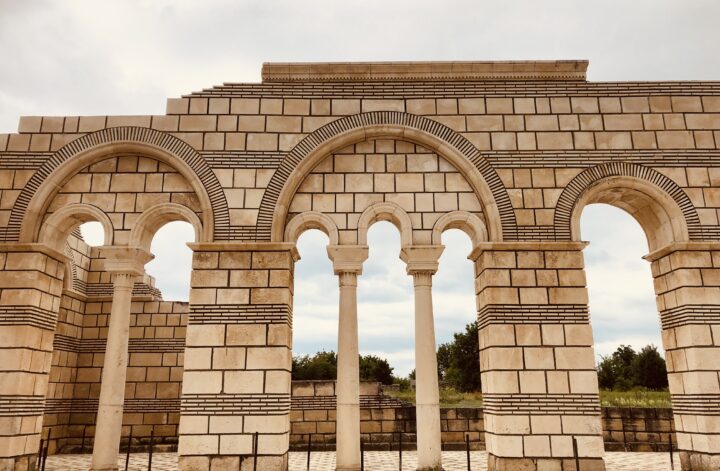 I have a Bucket list with all the places I would like to visit in Bulgaria. During summer 2018 I managed to make a round trip in Varna region and to tick the ancient city of Pliska, the Rider of Madara and Bolata Cove. Two of these sites are located not far away from Varna – the first spot is the first capital of Bulgaria – the ancient city of Pliska (located in 80 km western of Varna) and the second place is one of the most photogenic beaches in Bulgaria – Bolata cove (80 km north of Varna).

First stop of Varna region round trip: the ancient city of Pliska

Pliska was the capital of the First Bulgarian Empire between 681 and 893 AD. Nowadays you can see the ruins of the ancient metropolitan and walk around. The Historical Site (Museum) is composed of two parts: the Main Palace and the Basilica. The ruins of the Main Palace are well preserved and show the function of all the buildings in the past. There is a contemporary museum containing all the artefacts found during the excavation works. However, the Basilica (located a little bit further on the road) impresses more its visitors as it’s looks completed. This is the site you see on all the pictures and postcards): To sum up, if you are interested to know more about Bulgarian history, don’t miss out Pliska and put it on your radar (as I did and proudly ticked it ):

The temple of Cyrillic alphabet represents a big garden with all the letters from the Cyrillic alphabet made of stone. There is also a museum with wax figures of all the Khans and governors of Bulgaria starting from the foundation of the country until the Ottoman invasion. For all book lovers, there is a Writers’ alley outside of the museum where you can learn more. Armenians authors are included in the collection as the site is built up thanks to Armenian support as well). This is a unique place where you will immerse yourself in interesting facts about Cyrillic alphabet, Bulgarian history and Slavic literature.

If you visit Pliska, don’t miss out to pass by the Rider of Madara – one of the most famous tourist attractions near Varna region.

Third stop: The Rider of Madara

The Rider of Madara is a large rock relief carved on the Madara Plateau near Shumen. The monument is dated in the very early 8th century and it’s included in the UNESCO World Heritage List.

I’ve seen many pictures of the Madara Rider and thought it’s enormous, but in reality, it’s not so big as it looks in the photographs. It’s almost impossible to make a proper picture of it with an ordinary camera. The only way to shoot it is with a drone or by professionals from a closer distance. That why I don’t have a picture of it to publish here. Personally, I was not impressed by the Rider of Madara. But on the top hill of the Madara Rider is located the Fortress of Madara. To get there you have to climb around 350 steps. It’s a challenging hike, but the Panoramic view from the Fortress’ ruins is breathtaking. You can see the city of Pliska and even Shumen (the nearest biggest city). For those who adore hiking that’s the spot to be!

If there is Paradise on Earth it’s called Bolata Cove!!! I’ve seen so many pictures of it and so many sunsets shot there!!! I thought…” That’s another touristic spot full of people”…But not at all. It’s wild, beautiful and off the beaten path.

The first and ultimate thing to know about Bolata Cove

The one and the only way to get there is by car. The one and the only way to find it: to follow the road to Kavarna. Prior to head to Bolata, check Google maps on your computer and memorize the road after Kavarna. Once you reach Kavarna you won’t see any signs indicating the road. Don’t count on your GPS, it’s not going to help you. How you will find it? Follow the off-road and on the road itself, it’s written on chalk In Bulgarian – “Bolata”. Smart, eh?

Once you reach your destination, you will be overwhelmed by the red rocks surrounding the wild beach. The water is crystal clear. Nature around is virgin and wild. Almost nobody to be seen on the beach. If you jump in the water from the cliffs you will see crabs and fish and jellyfish (no swimming glasses needed, the water is transparent enough). The best picture spots are on the cliffs from both sides: follow the path and you will arrive on the top).

If you are hungry and are wondering where to have lunch or dinner, Mussel Farm Dulboka is around the corner (in 6 km only). The best place specialized in Mussels. Mussel soup, Mussel main courses and of course Mussel deserts! Bon Appetit!

The most important question – how to reach all these places – the ancient city of Pliska, the Rider of Madara and Bolata Cove

I would recommend renting a car. Pliska is easily reachable by public transport (bus), but Bolata is a wild beach in a remote area in the middle of actually nowhere….

Visiting Bulgaria this summer? You have your Bucket list done! Enjoy!